There was a request for an arrangement for a 40th wedding anniversary this coming weekend. I had no limits to what I could come up with. So I did a Google search of what 40th anniversary and it is a ruby anniversary. I went with red colors and tried a "tree" arrangement. I've always wanted to incorporate a tree like structure in an arrangement. This is what I came up with. 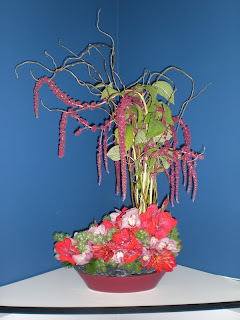 Not the greatest lighting and the water on the flowers probably didn't help with the reflection.
Here's 2 close-up pictures of the flowers at the bottom. I used dahlia's which are currently in season, some large and small cymbidiums and gladiolus. If I were to open my own shop, Ming fern would be a staple cause they are so versatile and they fill up space nicely. The tree structure was made from curly willow tips and hanging amaranthus. Amaranthus might also be a staple in my dream shop cause they give an arrangement such a different texture and shape. I was going to add roses but I kind of went over budget so I omitted it. 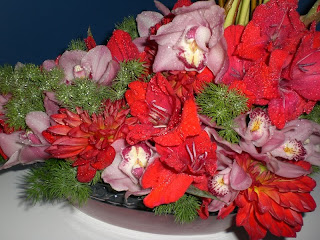 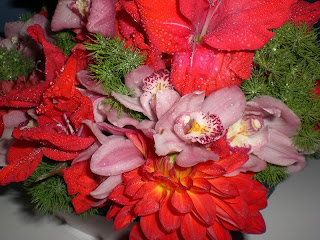 Posted by Chorizo at 4:01 PM No comments:

Trial baking for an up coming party

Can't tell you what type of party or who it's for but super excited. Tried 2 recipes; one sweet and one savory, both from Farmgirl Fare.

First was the savoury feta cheese and scallions scones. These came out really good. I was worried they would be tough cause I was working them like bread before I scrolled down to her hint. "Handle the dough with a light touch and as little as possible". Oops. But they still worked out. Not sure if I really like the feta cheese. I like feta but it's quite salty and every now and then, I get a bite of super salty taste. I didn't add egg wash glaze cause I like it when you eat bread and your hands don't look like you've been in the chip bag. There is already enough fat in the recipe that I am sure it won't make that much of a difference. 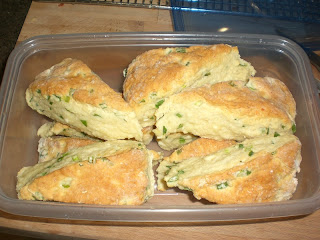 The second recipe was the chocolate chip and toffee shortbread cookies. I like toffee, shortbread and chocolate and thought what a great combo, especially for this type of party. But the recipe calls for 350 degrees (F) and 12-15 minutes. Followed everything as per recipe but when I peeked in at 12 minutes, the edges weren't brown. Just following the recipe. Another few minutes and still the same. I gave up after all the toffee has bubbled out and finally was somewhat tan colored. I guess shortbread is also not usually as "golden brown" looking like other cookies so I probably could have brought it out after 15 minutes. Doesn't matter anyways. I got my helper to make cookies for the party. 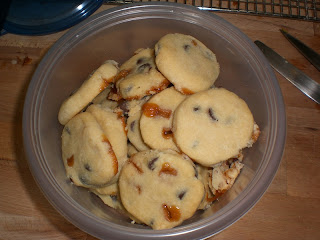 And no I did not finish all the baking. I brought them to a friend's workplace so I can get some feedback and clean the counter of bad temptations.
Posted by Chorizo at 12:13 AM No comments: