It's amazing how fast the rabbit's fur has changed colours in the past few days. I think he/she is also patiently waiting for spring. 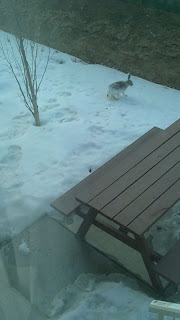 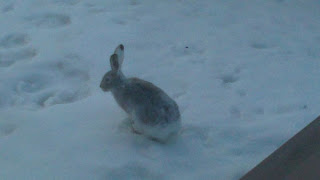 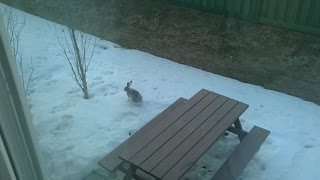 The pictures above might me a welcoming sight but can I draw your attention to the last picture. The little black dots on the uncovered concrete landing are not stray pebbles or rocks. Those are little gifts from our furry friend. I'm trying to see the positive in this, which is the adjacent rock bedding beside the concrete. "Oh honey....can you hose the patio area?" 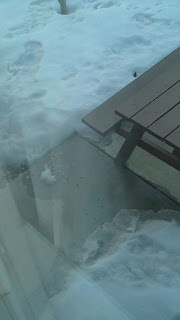 Posted by Chorizo at 8:39 PM No comments: 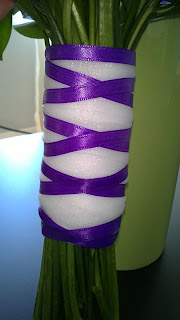 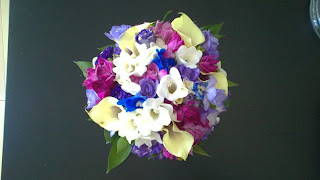 This was a trial bouquet for a friend who will be having her wedding this coming May long weekend. Her colours are hot pink, purple, white and blue. Very fitting for a spring wedding. She had hoped to have all tulips but they can be hard to come by in May. I know it is a spring flower but they are best in early part of the year. So I thought the best that would fit the smooth and uniform look would be freesias. We added calla posies, mini lisianthus and delphiniums in her bouquet to make it different from her maids. It's had to tell but the calla posies have purple centres. They are called "Picassa" and it has to be one of the most unique colours on flowers I have seen. I had asked for white posies but they turned out more cream then white. Fortunately, it worked out great cause her dress is off white, almost cream so it will work out perfectly. Her dress is more vintage 50's look so the cream callas will fit the vintage look.

Her maids will only have white and purple freesias against raspberry dresses. Can you just imagine the colours. It will be so colourful and beautiful.
Posted by Chorizo at 11:36 AM No comments:

Visit from an Old Friend 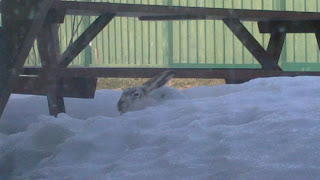 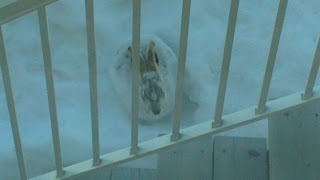 Spring? Spring is that you? I've missed you for awhile. I hope the colour change on this bunny friend of ours is a sign you are coming back soon. Oh please oh please.

These pictures were taken a few days ago but it got me a little excited cause the white stuff should be gone soon. This has been a long winter. So Spring, you are cordially invited to visit and stay as long as you like.
Posted by Chorizo at 11:31 AM No comments: 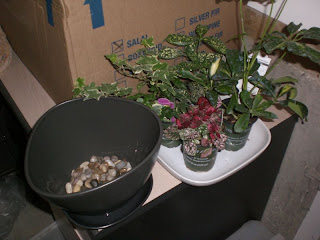 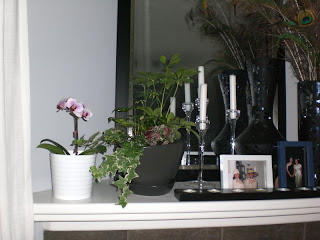 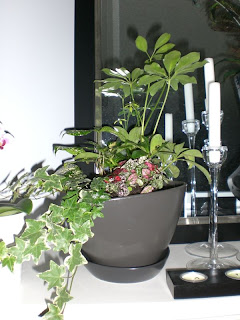 Maybe I was influenced by the new orchid plant or the final thawing of the weather, but I had the need to get some green in the house. I headed down the store and pretty much got the same plants as the last attempt. There was no maiden hair fern (one of my favourite) so I settled for the variegated ivy. The terrarium just didn't work so I made sure I got a nice pot and tried my second attempt.

Love the new and green look on the mantle. Can't wait till all the plants grow into the pot. Crossing my fingers.
Posted by Chorizo at 9:59 PM No comments:

I sewed a black border on the front of the quilt and I hope you agree that all quilts need a border to finish it off. 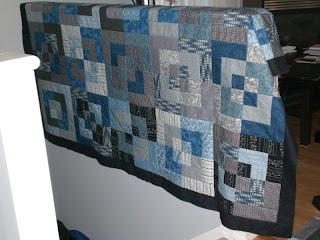 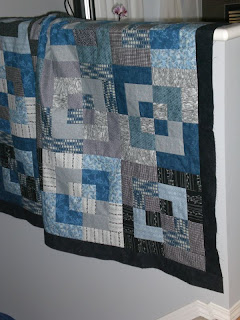 We are half way done as I just finish the back of the quilt. I don't know why but as I was huffing and puffing last night, I realize I always forget to plan the back when I shop for fabric. I don't want to make a novel out of this post so I will save you the pain of reading all the roadblocks I encountered to get to this point. I posted two problems yesterday but seriously, I had more then 5. When it's after 8:00 p.m. and you have been working on the quilt for more then 3 hours straight, huffing and puffing seems appropriate. 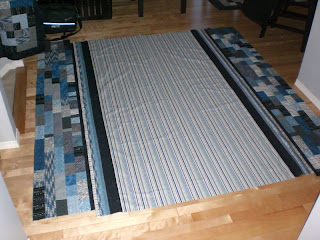 As you can see, the extra bento box blocks didn't make the cut and a new fabric was added. The extra blocks will be used for couch cushions. It was just going to be more complicated if I added the blocks to the back instead of using a large piece of material. 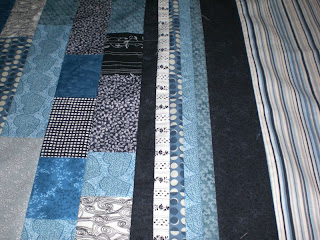 I hope to go shopping tomorrow and get a big piece of batting so I can finally start to quilt the pieces together.
Posted by Chorizo at 8:42 PM No comments:

Have I told you that I love Sundays?! Well, I really love sundays. Woke up early (that I still don't like very much) and met up with my parents for dim sum. MMM! I have been craving for it for awhile. That greasy meaty "h'orderves" always hits the spot and I was pretty much ready for my nap. But the best part was a little present from my parents. They got me a little moth orchid plant. My mom has a real green thumb when it comes to orchids and was probably shameful of me when she watched my plant wither away. It was a sad sight. Well, wish me luck as I try again. 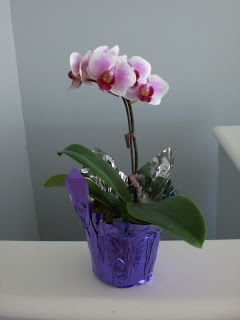 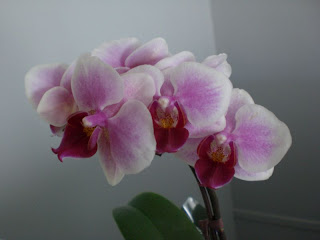 Thanks mom and dad!
Posted by Chorizo at 8:33 PM No comments:

It was a nice day off and my sewing machine was whizzing away when roadblock #1 appeared. I ran out of beige coloured thread. Okay, no problem. A small road trip to the store to get some thread. I had to go sooner or later cause I had to get thread for the quilting part. So I picked up a jumbo spool of variegated blue thread for the top. 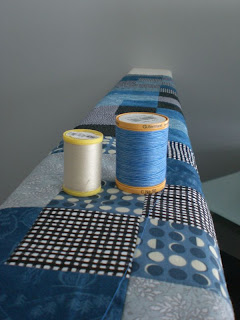 I did the "thread" test and it looks really nice over the blues, blacks and whites. 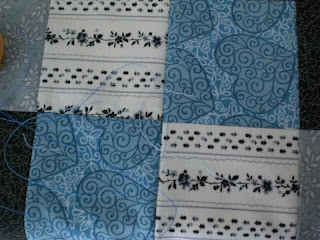 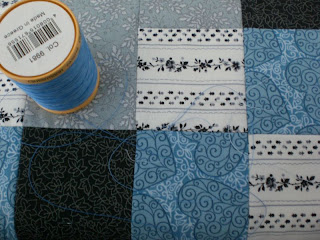 Roadblock #1 solved. So I continued to sew some more and stopped when I had all but the last row of bento box block to sew on. Roadblock #2. I totally forgot that the batting I usually use is 90" wide. This means if I sewed another row of blocks, it would make the quilt measure 75" x 90". Doesn't sound like a problem but it is. I have made it a standard for all the quilts I make to have some sort of border. I think it makes the quilt look polished and well thought out. As you can see, I didn't really think this one thoroughly. 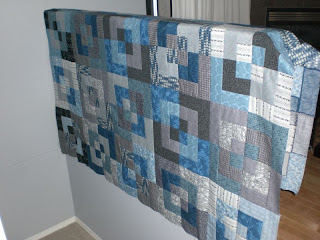 So I decided that the last row of bento box blocks will go on the back and just finish the front with a simple black fabric border like I had plan. I will let you know later how this new plan has worked out.
Posted by Chorizo at 2:52 PM No comments: