On the day of the party, I woke up extra early to make the rest of the floral arrangements. First things first was the corsage. I was pretty proud of my work but cause I was in such a hurry, I forgot to take a picture of it. I thought I was pretty ingenious on hiding a little bruised spot on one of petal with the little sprigs of pink flowers. But I have no picture to show for it. Oh well, I am sure something will come up later..I hope.

The other surprise that I wanted to do for the party was to wrap a small little flower and place it on each table setting. After an hour of work and only 10 made....I was forced to scrap the idea. The party was expecting 40 table settings so even putting a flower on every other setting was going to create permanent cramping in my fingers. Why did I not take a picture!?!?!?!?

So the only picture that I did take was the left over bouquet I took home. I would have loved to keep it for myself but I thought it be nice to bring it for work. I thought it be a nice surprise for all the people at work that were not able to attend the party. 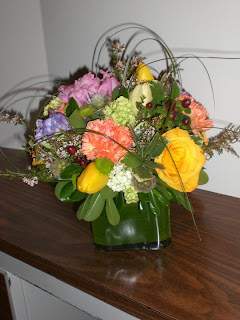 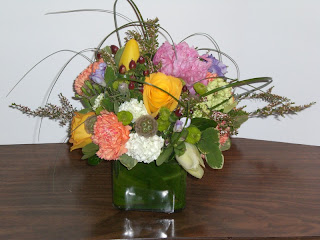 I added all the left over flowers I had at home and placed it in a glass square vase. I didn't want to show the stems so it used big leaves and covered the side of the vase. It was a hit at work and really appreciate all the compliments. Yahhhh! I can't wait till I get to do another project next week. I will keep you posted and hopefully I will remember to be a shutter bug.
Posted by Chorizo at 10:04 PM No comments:

Flowers for a Very Special Lady

It's going to be a very special lunch tomorrow because it's my coworker's retirement party. I am extra excited since I was asked to make the arrangements. I love it when there is no budget limit.
Here are some before and after pics. 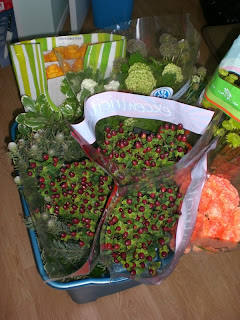 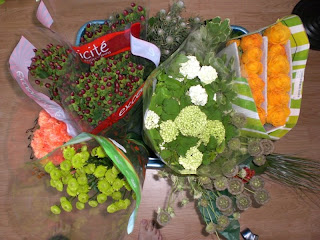 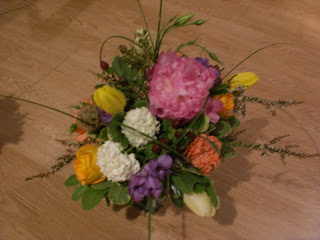 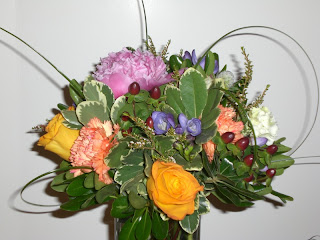 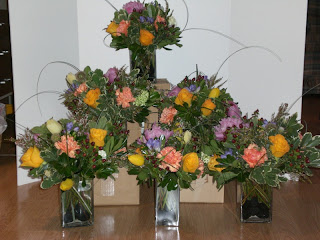 I hope everyone likes the centrepieces cause I do. Besides the table arrangements, we wanted to give her a really nice bouquet. Unfortunately, the orchids were not the best quality but I think it still looks pretty fancy. 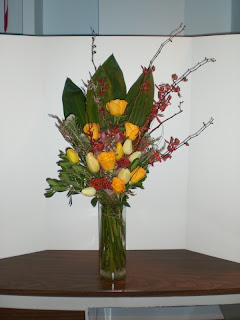 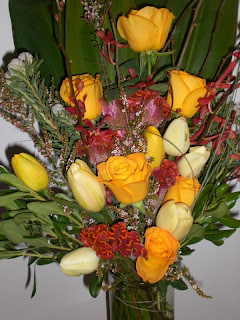 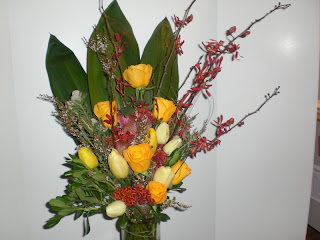 Apologies for the pic quality. After working on flowers for 6 hrs straight, only a camera on a tripod can take away pre-party jitters.

Now you good little children go to sleep cause I have more flower surprises on the next one blog. Until tomorrow morning.
Posted by Chorizo at 11:38 PM No comments:

Too Cute for Words

I am going to hit the road this weekend for a girlfriend's baby shower. I am really excited because she has no idea I am coming so it will be a nice surprise as I have not seen her for over 2 years.

So her little addition is the lucky one who will get that quilt I made a few months back. Tell me the gift bag is the cutest you have seen in awhile. I was going to go for a simple color but I was convinced otherwise. 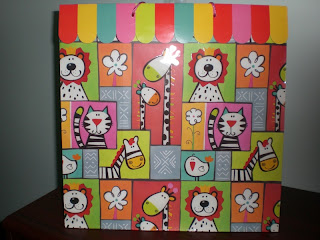 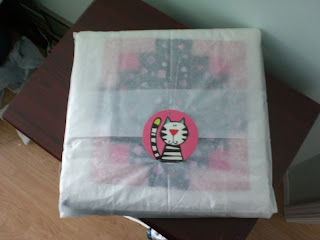 I was trying to warp the blanket with tissue paper like how fancy clothing stores wrap your purchases. I didn't have a cute sticker so I used the gift bag tag. I know, I know, too cute for words. Admit it, I can hear all the aww's. ( Silent or out loud) 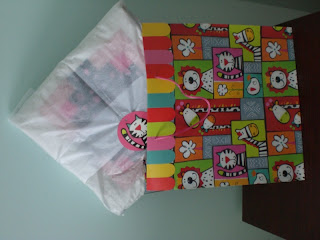 There goes the kitty blanket. 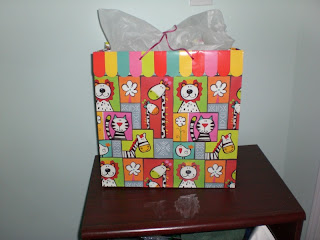 Final presentation. I better get going. I have to be there in 2 1/2 hours. Better go pee before I hit the road.
Posted by Chorizo at 10:53 AM No comments:

It's been a while I know, I know. But I have something new to show you all. I have started a new quilt which I had hope to have it done by beginning of May. As you can see, I was not exactly very successful with that idea. 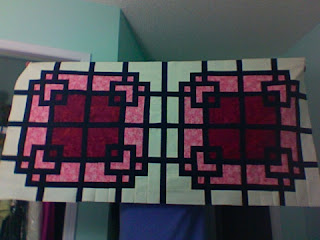 I always thought the look of Chinese Lattice was really nice as the different colors almost gives it a stained glass look.

Initially, I did not intend to make another pink quilt but the fabric available at the store did not have anything I liked. There was a lot of humming and hawing as we even drove to Sherwood Park and every Walmart in town. That's right people, fabric at Walmart is not bad. Sometimes I think the fabric is just as good, if not even better then the ones at the fabric store.

There is another color that will be added later to the border but I won't say which. You can let me know later if you like the color scheme. WooHoo, I am really excited about this quilt because this quilt is much harder (many, many pieces). There still are no curved pieces but when each block has more then 20 pieces, I think it's a bit of a stepping stone.
Posted by Chorizo at 10:31 AM No comments: