I took inspiration from a picture I stumbled a few weeks back and made my own spin. The arrangement was a big flower ball of hydrangeas and roses but it had anthuriums and tulips flowing down on side and almost wrapping around the stem of the vase. To tell you the truth, I was going to do the same thing but my anthuriums were too straight and snapped. On to plan B. 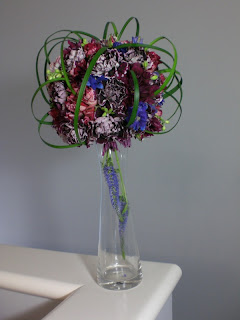 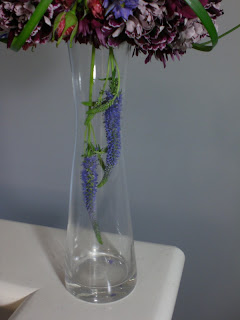 There were suppose to be purple anthuriums and purple veronicas flowing out of the flower ball and wrap around the stem of the vase. Instead of leaving out the veronicas, I just incorporated them inside and underneath the flower ball. 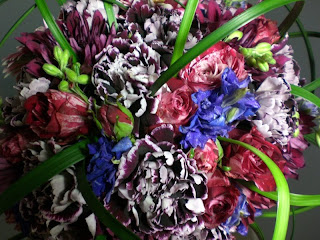 Lovin' the spray roses. They are dark pink with light pink in a strip and splatter pattern. No artificial spraying, just a really cool variety. There is a variety in red that is very popular during valentine's season. Unfortunately, i can't remember the name. 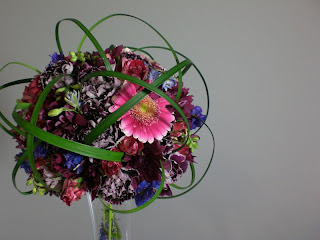 After working briefly at a floral wholesale company, I pretty much hated gerbers and carnation and spray poms. I think it was how those flowers were used in arrangements. All the same look and didn't show how the flowers could be used differently. Somewhere, somehow, someone showed how carnations bunched together can make to look like hydrangeas. We all love hydrangeas but why do they cost an arm and a leg? Anyways, hydrangeas are only available during summer season, but carnations are year round and come in so many colors of the rainbow. I love you hydrangeas but you are going to ride in the back for now. My eyes are on you, carnations.

As for the rest of the flower ball, it was made up of purple poms, larkspur, larkspur buds, mini pink gerbers, spray roses and orbiting lily grass.
Posted by Chorizo at 9:40 PM No comments:

Another Pink Wedding but Romance was the Theme 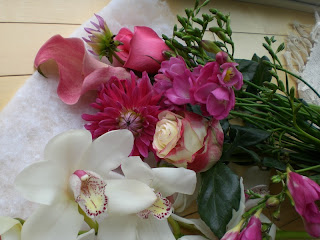 Here is a shot of the the flowers before the transformation happens. The white/cream rose with pinkish red tip is called "sweetness". It really is a sweet looking rose. The freesias' scent were so intoxicating. It was hard not to stop the car and smell the freesias on the way back from the flower shop. 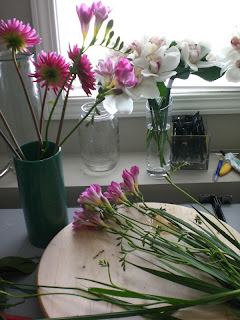 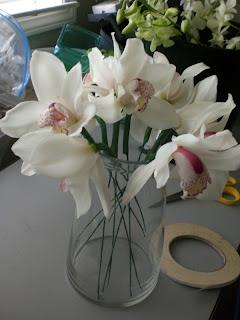 Had to wire ever single orchid. Big and small. But so worth it in the end. I noticed at the reception that one of the bridemaids' bouquet, which were all orchids, looked like it took a beating. I guess the story was a bee had flown onto one of the bridemaid's bouquet and she freaked and instinctively threw the bouquet. I guess that would explain the condition of the flowers. Orchids are tough but not that tough. 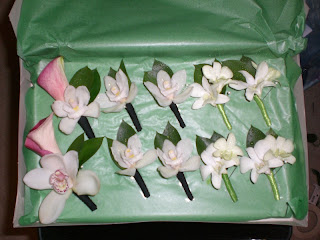 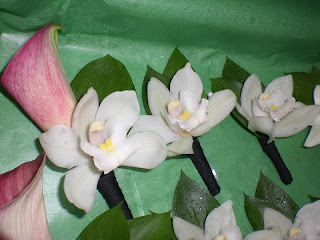 Notice the 2 calla lily boutonnieres. That is because the groom could not decide if he wanted the same orchid used in the bride's bouquet (bottom) or the same one used for the groomsmen's boutonnieres. He ended up choosing the one that looked like his groomsmen's. The wedding party had the stem wrapped with a matte colored ribbon so it would blend in with their suit jackets. This gave it a different look cause the focus was completely on the flowers. The boutonnieres for the dads' and brother were wrapped with a bright green satin ribbon so the stem would be noticed. I think this worked out better since the latter used smaller dendrobium orchids and it was a nice balance. 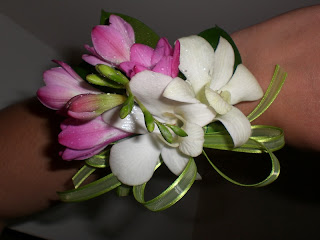 This is one of the pair of wrist corsages for the mommies. They were the only corsage that had the pink freesias. 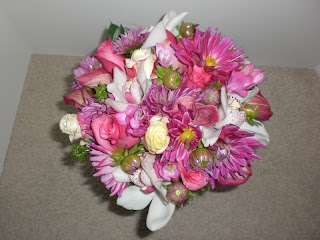 This was the throw away bouquet but is very similar to the bride's bouquet. The bride's just didn't have as many dahlia flower buds. 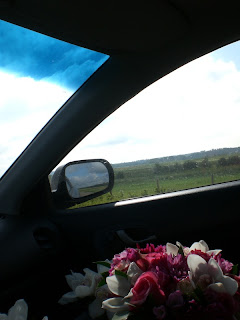 The flowers on route to their destination.
Posted by Chorizo at 10:06 PM No comments:

I admit, I was too cheap to buy another mass manufactured card for a special couple this weekend. So I made a card for them. Expressing your creativity=fun!!! 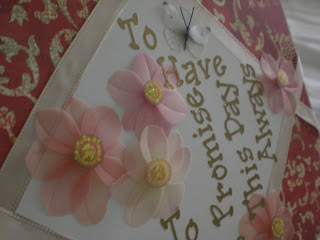 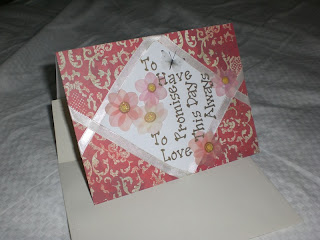 Posted by Chorizo at 8:02 PM No comments:

Summer Saturdays are one of my favorite days. Only because it is another excuse for a shopping trip. What I am trying to say is, I LOVE FARMER'S MARKETS!!! The exciting news is that there are plans for another farmer's market to be open in the south side of Edmonton. It will be known as Southwest Edmonton Farmers' Market. It won't be much of a wait cause they are hoping to have it open by spring of 2011.

If you follow the link to the website, there is a little contest on the site. They want someone to come up with a catch phrase for the market. The site doesn't say what the price is but I am sure there will be perks and a little royalty with coming up with something catchy.
Posted by Chorizo at 8:12 PM No comments: